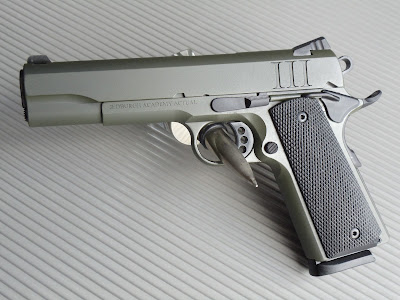 Full disclosure, I am a huge fan of 1911's.  The first 1911 I ever fired was one issued to me by a Turkish Army senior-NCO in the early 1990's, while I worked with them  on a joint Turkish-US Gov project in the mountains of southeastern Turkey; an area, at the time, that was a hotbed of Turkish-Kurdish fighting as well as a little thing called Gulf War One just across the border.  If I remember rightly, the pistol was a US Government model (probably surplus military sales), and not an indigenously produced clone which several companies in Turkey are now producing to good reviews.  Since then, I've loved this firearm, and I think I've only ever run into one 1911 that I would not trust my life to; and it's one I no longer own.

The Jedburgh Academy Actual (JAA) 1911 is built on a stainless steel frame and slide, coated in matte olive-drab green ceramic (Cerakote), which cleaned off carbon without any solvent, even after firing almost 500 rounds.  It has a flush cut and target crown Match-grade barrel, finished with black Melonite.  The gun came with two sets of grips, checkered cocobolo (brown wood) and combat black rubber (which were on the gun during my test). The slide sports 3-dot night Trijicon sights. The frame was fitted with a slightly extended combat style magazine release and an extended ambidextrous thumb safety.  The ambidextrous safety is crisp and positive.  In my experience, many 1911 safeties take some break in time, whereas this one did not.  The magazine well is beveled and chamfered, and the ejection port is flared and lowered.

The JAA has an adjustable trigger (this one in black, "3-hole") with a custom trigger group, with a trigger job set to 3.75 - 4.25 lbs with a clean let-off.  The reset is a fairly standard 1/10th of an inch or so for a 1911.  The gun failed ZERO times out of almost 500 rounds, using everything from standard roundball to flat point to Hornady carry bullets, to hollow points of several types (see Table).

To make certain that I REALLY put the JAA thru its paces, I took the bulk of my 500 rounds of ammo and mixed it all loose in a bucket before heading out to the range.  I then used a variety of magazines (Wolf, Act-Mag, Chip McCormick, Wilson Combat, USGI - - a mix of 7 and 8-round mags) and loaded each with whatever I got when I reached into the bucket. This ensured each magazine was firing different loads, bullet types and bullet weights when I was testing. 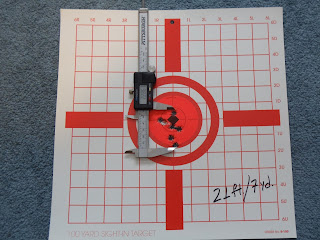 Again, I had ZERO failures in almost 500 rounds, and the gun performed flawlessly. 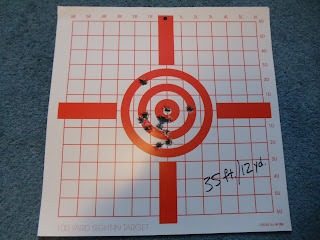 The original USMC qualification specification for the 1911 was a 4″ spread of 5 shots at 25 yards over several brands of ammo.  The USMC requirement said an “unsupported firing position,” so that is how I shot my tests.  Ultimately a gun is only as accurate as the person firing it, and I make no claims to being a "dead-eye Dick."   Age, accompanied with bi-focal glasses, ensures any target out past 35 feet is just a complete blur when I'm focusing on the front sight thru my bi-focals.  I am not an accomplished pistol shooter, but I was able to make a respectable showing (slow fire!) out to 50 feet. Check out the target pictures.  My 7 yard target was (in my opinion) was respectable 2.28-inch group. 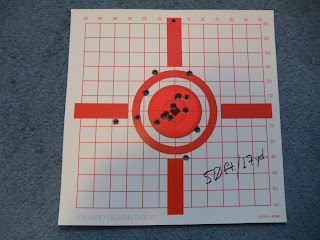 Please see the pictures for details of my outing with what is probably the best 1911 I have ever fired.  - Conor in Idaho
Posted by K at 9:50 AM