When Antifa Said They Were Coming To North Idaho... 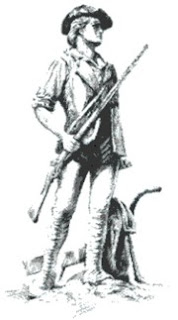 What about your AO?

COEUR d’ALENE — Reports and rumors that groups bent on rioting and violence in Coeur d’Alene brought out men and women with guns on Monday determined to stop them if they arrive.

Dan Carson was patrolling Sherman Avenue with an AR-12 semi-automatic 12-gauge across his chest, an AR-15 strapped to his back, two 9mm handguns holstered and a .38 special, too.

“I heard there are some people on the way who shouldn’t be here,” he said early Monday evening.

Those people, he said, were Antifa and Proud Boys, militant far-left and far-right groups.

Carson said he was in Spokane Sunday night helping protect business there. He said he supports the right to protest and is also upset about the death of George Floyd.

“By all means. I’m on their side. I disagree with what happened,” he said. “What I don’t agree with is when you turn to violence, and you start rioting and destroying businesses and hurting people who have nothing to do with anything.

“That’s what I’m here to hopefully prevent,” he said, adding, “I’m not going to be alone. There’s a lot more on the way.”

He was right. Soon, more armed men, self-described as a loosely formed group of patriots, arrived. They took up posts at corners on both sides of Sherman Avenue.

Later, they were joined by hundreds of citizens packing rifles, semi-automatic weapons, handguns, and bows and arrows.

The sidewalks were packed with people walking up and down Sherman Avenue, firearms proudly displayed for all to see.

They carried guns, had them holstered around their hips and had them strapped across their backs.

It was literally a call to arms — and people responded. Armed citizens proudly turned up with guns and American flags. They sent a clear message: North Idaho will protect its own.