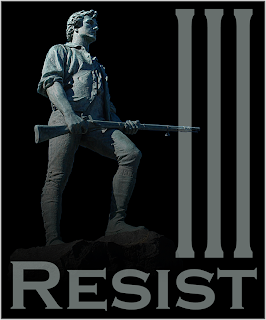 For the first time a large number of Americans did not simply sit and grow angry.

They did not simply write letters or send emails or make phone calls.  They've already done that, many times.

They did not simply head to their local rally point or voting booth.    They've already done that, too.

Vets and other Patriots from across the country showed up to say their words in person.  If that is where it had stopped, yesterday would not have been significant.

"To the White House!" the cry climbed on the misty, cool DC air from very near my shoulder, and a long train of Americans began snaking from the Memorials toward the home of the President.  They picked up the symbols of .Govs animus and decided to return them to sender, and seek a discussion about our current long train of abuses.  Yes, those inside the White House were invited outside to talk, many times, by Vets and other Patriots in attendance.  Those invitations died on the air.

But that simple act, the courage given to those who heard the cry to head to the White House, the tall stacks of Barry-cades dropped at both sides of the property, represent action.  Tangible, real action.

The rattlesnake rattled her tail.

The King's Men abandoned the field.  Some whispered apologies as they walked by us, heads and eyes low.  Some of them know what they are doing is wrong.  It is not too late if you are working as a cog in the machine.  Walk away.  Just walk away.  Find the courage in your hearts to do the right thing, now.  I dare say most of us will forgive you - today.  Tomorrow may be too late.

October 13, 2013 was a significant day in American history.  No blood was shed.  But the nation heard the rattle.  It started with the voice of one man, backed up by a thousand and more.

We have entered another phase of resistance.

Until yesterday we had only used our words.  Yesterday, we added a single defiant action, to prove our sincerity.  Proof of Life of American Patriotism was provided, and left at the front and rear doors of the White House.  When the King's Men saw that Proof of Life, they blinked.

We've used our words.  I believe yesterday marks the end of words alone.

Real Americans are about to start giving out free handfuls of Fuck You.