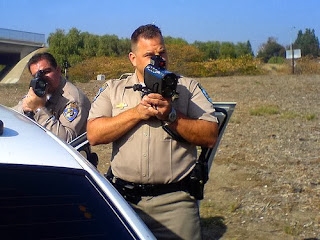 Local .Gov is as infected with vermin as state and national politics.

There are organizations out there that try to keep the beast in check, but it doesn't work.  The profit motive is too strong for dishonest people, because they can simply make too much money and accrue too much power even in lowly county or city politics.  These are the people who will never seek true Liberty for you - only for them.  That is called tyranny.

The National Motorists Association runs SpeedTrap.org, a site that helps document areas across the country where local .Gov works to funnel Citizens into organized thievery by local officials.  Some wear badges and guns, some are merely bureaucrats shuffling paper, and others are the true snakes who pass the laws that make it all "legal" and give license to the theft.

Here's just one excerpt from a small town in Texas:

Interstate 30 in Titus county at the winfield exit .8 miles   Winfield, Texas
Winfield has incorporated .8 miles of Interstate 30. The whole process is very disgusting. They might as well put up a toll booth and charge fees, at least that would be honest. They have the video running at all times so be careful what you say. The officers are young and jumpy. The judge and city attorney are in cohoots. You will not get a fair trial. The city attorney, a woman, is on some kind of medication, maybe legal, maybe not. Don't have a pre-trial conference with her, a waste of time. Be ready for two trips, arraingment and trial. They will make an offer to make the ticket dissappear for about a $100.00. A few calls to MADD, 8 liquor stores in town, pop. 450, might help. Rumor is local residents get beer for teens.
Apr 29, 2010

It fits tangentially with this story about a woman who was forced to strip at a Texas jail - for a speeding ticket.  Here's that story.

Petty criminals and thugs operate within .Gov offices and uniforms.

They line their pockets with wealth stolen - at the point of a gun - from Citizens.  They advance their racist, greedy and Maoist perversions under color of law.  They think they are better than the average Citizen.

When you clean up your AO, don't forget these mini-JBTs.  Even the elected ones are filth.

Resist tyrants.  Everywhere you find them.  Throat punch the bastards while they stand in line at Starbucks.  They are all taint-lickers, as bad as every FSA idiot in the country.

Oh - if you are reading this and don't like what I say about corrupt .Gov officials: Fuck You.  Sideways.  Come get some.