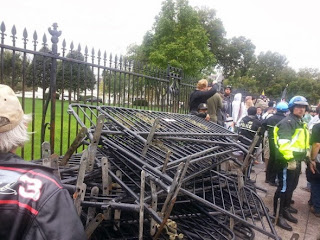 They were flat-footed, under-staffed, and nervous.

Military Vets are not a Tea Party gathering of old blue-hairs sitting in lawn chairs at a small community park.  Tacti-Cool geared cops who suffer from over-nourishment (thanks Jeremiah!) and an extra X chromosome learned yesterday that they are not the hardest Team in the polygonal battlespace.  Not even close.  As tensions peaked, they stood down when faced with passionate Vets and other Patriots who dared challenge their diktats.  There was a deliberate tactical decision taken somewhere in their ranks for a strategic purpose - because they came to understand that if things escalated much more and things were to grow sporty - they were too few with too little.

That was a moment to behold.  The crowd cheered as the King's Men left the field.

And make no mistake, if you continue to work for the machine that is grinding Americans, you have chosen your team - and we are watching.  We will remember.  Making lists is not a one-way street. "Just following orders..." will not be accepted.  Apologizing is futile.  You will be judged for the injury you have inflicted as you "...just did your job..." and infringed the Rightful Liberty of your Countrymen.

Jim Miller and I watched the events with a wide view of the field.  Alan and CA and JX (a friend of CA's who I will not name, not sure how out he is online) were in the front ranks, pressing the message of the day.  They were shoulder-to-shoulder with several hundred others who have grown agitated with the oppression coming from Washington.  Yes, 'agitation' is the proper word.  Had this group of Vets and Patriots been 'Pissed off', there would have been a much different discussion yesterday.  You must understand this group of Vets and Patriots know how to shoot, move and communicate.  Many of them understand incoming hostile fire, and close-quarters interpersonal disagreement resolution.  They do not rattle when a thug in a riot helmet makes a mean face or uses his big-boy voice.

Yesterday was a necessary step in the fight for Liberty.

Yesterday the rattlesnake signaled its only warning.

We were in DC, but remember the fight for each Patriot is in his own AO.  Local, local, local.  You will not need to travel far from your front door to find Evil and engage.  Making noise in DC offers important images and words needed for the fighters who seek Restoration of Liberty.  As it did yesterday, it also offered a morale boost and a bit more open recognition of the illegitimacy that covers the Enemies of Liberty.  But images of Americans kicking orange cones aside and hiking on 'closed' trails across the country are just as important.