"We need another Boston Tea Party..." 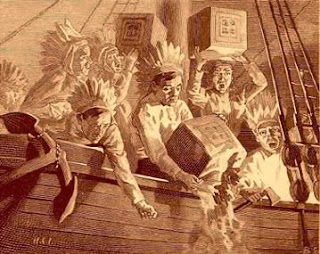 I have maintained for years that once the average American woman gets involved in the Liberty Movement the battle for Hearts and Minds will have essentially reached as far as Patriots can hope.  Most women will begin to participate when they sense a threat to their children.  When she packs her man a lunch and tells him to go find something Evil and make the world safer for her children, rather than go to work, Liberty efforts will have reached peak-manpower. Consider the Minute Women of the USA and determine if your wife is ready to follow their lead.

What brings the topic up today?  I was at the vet this morning getting meds for Hana, and the gal helping me got onto the topic of how meddlesome and heavy-handed .gov has become (the conversation began with the $.05 'bag tax' levied here in Montgomery County on every shopping bag).  Remember this is the DC Metro, where .gov has a stranglehold on the economy.  Bad-mouthing .gov is essentially biting the hand that feeds.  Her lowered voice and nervous glances at her co-workers conveyed that she understood the blasphemy she was speaking.  She is in her early 50's, and finished our conversation by telling me that her 70+ mother told her the other day: We need another Boston Tea Party.

One of her co-workers heard and grinned approvingly.  Another woman. 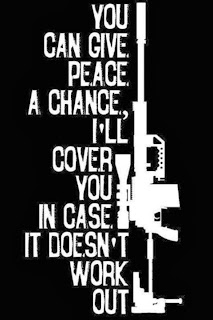 If such sentiments are infecting the women of the DC Metro area, in the very blue-est of blue counties, and being discussed with very casual acquaintances, one must wonder the state of affairs in Red country.

A sitting US Congressman has now called the Tea Party the domestic enemies he and others took an oath to defend against.  Couple that with the below post that takes notice of the MoveOn.org petition to arrest Establishment Rs for sedition.

Remember, all signs indicate the 2014 elections are meant to be nothing but a coronation of our Politburo.

After that, you'd better be ready.

The North American Liberty Games, Episode III, have already begun.  Look for the Enemies of Liberty to make a few headlines engaging "Tea Party Terrorists" and the like as we get closer to the election.  The Left and Establishment Rs will join forces to make protection by government a campaign issue.  They will seek to justify DHS and the escalation of the Police State.  The Left is laying the ground for this all over the place - from Congressmen labeling Tea Party as domestic enemies, to MoveOn sedition charges, to television and movies portraying "Patriots" as murderous threats to America (Anyone watched an episode of Revolution recently?)

Your role in this campaign?  Tag!  You're the Terrorist.