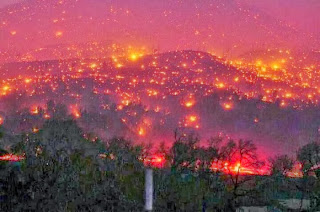 This post isn't about MBV, though he is mentioned for it is important to make the larger point.

Mike dropped several posts, all designed to get a rise out of me.  It is a well-established pattern, one we have identified long ago.  It usually flares up right about the time we (The Patriots around me) are making headway on some important front.  In this most recent iteration, our advances were relatively benign: the noose ruffled feathers and illustrated an ideological divide, we were also heavily advertising Bracken, and a few other things.  So Mikey began.  I ignored until he accused me of being able to fire blindly into the bedroom of his child.  Then I unleashed Hell.  I think to his surprise, others piled on.  When he dragged CA from WRSA into it, he was buried.

The point - we started swinging and we did not stop until he crawled away beaten and bloodied.

Now, you will remember that Mike has been trying to undermine III Arms for quite a while.  He made a BIG case about suckering an Alabama FFL07 to start putting the III Arms TradeMark on his products.  The folks at III Arms politely asked them to stop; they begged Randy Booth (Red Dot Arms owner to check with his attorney) and were treated to a steaming pile of fuck you for their kindness.  Mike reveled in this, calling me a "TradeMark Extortionist," among other impolite descriptors.  OK.

Then Holly (Managing Member of III Arms) and Jim Miller (President of III Arms) decided to go medieval on Randy Booth at Red Dot and bring the wrath of God down upon his ears.  As of 2:30 am tonight there is an absolute lack of III branded material on the Red Dot site.  So, Mike again eats shit.  Not that this exonerates Randy or Red Dot, they will still be forced to answer for their hubris, previous actions and injuries, but it proves my ultimate point of this post.

When you are attacked or wronged, you tolerate that abuse as long as you choose to accept the abuse.  You turn the cheek until you are done turning the cheek.

Then, you go hard.

You go nuclear.  You scorch earth.  No prisoners.  You make your enemies beg for mercy.

Then you go harder.

While I have ZERO affiliation to III Arms aside from cheerleading - I am married to Mrs. Kerodin, and people WILL pay for their disrespect of my wife.

When you are fucked with, you win.  Or you die trying.

Proportional response is not a Kerodin trait.

When you are attacked, you reply harder, with everything you've got.  You win.  Epic win.

Randy at Red Dot Arms get's it, now, we hope.