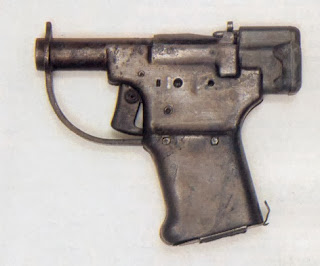 **THIS IS A III ARMS CONTEST**

For our engineers and savvy Patriots, and anyone who wants to tinker:

Often III Arms announcements are released here because it is the biggest audience we have unless I ask WRSA for a favor.

As most of you know US Army PsyOps built millions of .45 ACP Liberator pistols to be dropped to French Resistance fighters to use against the occupying Germans.  The little gun was a master-stroke of simplicity for accomplishing a very specific task.  It is a single-shot.  The action is manually operated, and the spent casing was pushed from the end of the barrel with a (supplied) wooden dowel.  A few extra .45 ACP rounds were stored in the pistol grip.

The concept was simple: The Partisan palmed the Liberator and found a German sentry late in the night and got close using guile or tradecraft, busted a .45 cap in his arse, then took the German's weapons and ammo - then got the heck out of Dodge before other Germans arrived.  He'd then pass the Liberator to the next unarmed Partisan who would repeat the process.

III Arms:  The next item on the company agenda is a modern Liberator.  Forget the shape and engineering details of the original - this is a chance to make the Liberator in your image.  A few specs: It must remain single-shot.  It must have a space for extra rounds.  It must be SIMPLE to operate and build.  It MUST be 100% buildable on a CNC machine.  It must have a retail price-point that allows most anyone to afford one - Team Leaders should be able to buy them by the dozens to hand out when SHTF to all those folks who never prepped.  I would recommend you use current barrel blanks - it comes pre-rifled and you can cut it to whatever length you wish.  Personally, I'd thread the end of the barrel for a small suppressor, but that's just me.  The fewer the parts, the better.  It should be intuitive to operate so ANYONE can find one and put it into the ear of a regime thug and take his gear kit.

It MAY NOT use stampings.  Remember - EVERY component (except barrel blanks) must be able to build on a CNC - this way Patriots anywhere with even a hobby-level CNC can build one in their basement.

The design needs to look like a small pistol - nothing camo'd as a ball-point pen or other item.

NOTE: Do NOT get into trouble with ATF by building prototypes in your basement!  Use drawings, please.

Ammo choices: I'm a .45 ACP guy.  But let's be serious - if the idea is to get within contact range, you don't need that much kick or noise.  At buckle-to-buckle range, I'm as deadly with a .22LR as with the .45 ACP.  But design is up to you.  Building in multiple calibers is pretty simple once the design is worked out.

What's in it for you?

First: You will be contributing to the preservation of Liberty.

Second: The winning designer will be presented unit number 1 - which will become very valuable.

Third: The winning designer will receive 10% of the net sales of all III Arms Liberators sold, until you are dead.  If you designate an heir, that person will get your dividends once you are gone. (I am a hardcore Free Enterprise guy - I believe Americans should get paid for their work.)

What's next: Design your Liberator.  You do NOT have to make blueprint-quality drawings - Miller is a smart guy and he can work from pretty good sketches.  But make sure your drawings are as good as you can make them. Make sure your drawings are complete - he can't read minds.  Include dimensions. If you are able to send him computer versions of your design, I think his life gets much, much easier.

So, for all of you mechanically capable Patriots who feel that maybe you can't contribute as much as you'd like - here's your chance.  Design a modern Liberator and help real Americans kill commies for mommy.

Submit ALL designs to: information@IIIArmsCompany.com  If you are going to submit paper designs, I'll give you an Idaho address for submissions in the near future.

This contest will run through the winter.  It begins now and ends March 21 (Springtime).  Jim Miller may get designs early and decide to build prototypes.  He may not.  Jim is Jim and he'll do what he feels is best for the project.

Legal notice: Submitting your design gives exclusive rights to III Arms Company to produce the prototype/design you submit and the company holds those rights until the contest is officially over.  You may NOT submit to any other company.  The winner is obligated to accept the above terms.  If your design is NOT chosen as the winner, all rights immediately revert back to you, in full.

Game on, folks.  Let's bring the Liberator into RevWarIII.