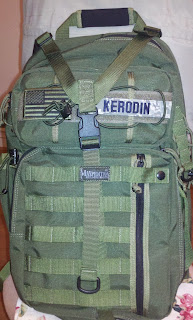 I only own one Maxpedition pack, it is he Gearslinger Kodiak pictured.  For short capers I strongly prefer a sling pack to a ruck/backpack.
I have used this bag pretty hard, and it has held-up very well.  When Holly and I get set up in Idaho we are going to ramp IIIGear back up to feed some of our Patriot activities.  Question 1) Maxpedition charges $168 retail for the Kodiak.  Is this line of gear worth offering?  It is not the cheapest gear on the market, but it is quality.  They have a design team that is smart and fits pockets and molle loops in nooks and crannies, while keeping a respectable and competitive footprint.  But all IIIGear, from flags to shirts to patches and even branded knives is all morale and cohesion.  IIIGear is not a revenue source for serious Guerrilla Operations.
Question 2) This is important and something I have been struggling with for a while, and I need bigger brains than mine on it.  As you know, none of us involved in IIIGear, III Arms, III Citadel take a salary.  Not a dime.  I disclosed back in the spring that as Holly and I travelled the country teaching CQB, that would be my personal income, because we have shut down our primary business.  The Studio is also going to be my paycheck, but as a III business, a percentage will go into the Citadel account.  But ask anyone in the community who offers training - we usually dip into our own pockets during a class,﻿

Here is the important conversation that I have raised a few times and need a solution,

Running a counter-revolution is not cheap. It never was.  Our Founders and Framers came out of pocket and ended up poor, many of them.  They dedicated entire businesses to funding the Patriots.  Securing gear, from NV gear to packs to fuel to vehicles that have been sanitized and can't be traced back to the Operator, to comms, to weapons and ammo and safehouses, and on and on and on - it takes money.  It takes WAY more money than will EVER be raised selling IIIGear or III Arms keyrings. III Arms holds the most promise for being a money-maker, but it was created not to run covert or clandestine ops or to fund Guerrilla Operations.  It was created to build a community, and that is what it is doing.  And believe me, Guerrillas who try to split time between family and Guerrilla work and cubicles to pay the bills are NOT going to win this struggle for Liberty.

I'm not asking you to donate any money to the 527.  I'm not asking you to skip a mortgage payment and to get your neighbor to do the same.  I'm simply telling you the simple and hard truth - unless the III Patriots begin to grease the operational wheels with real cashflow, there will be no serious resistance.

This post evolved into two separate posts - the next one is the meat - coming soon.