Sometimes you have to let it evolve... 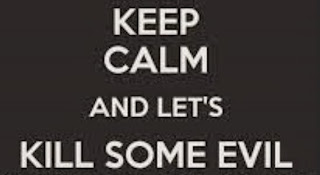 The III Patriots who trained with me in my Fight to your Weapon class have heard me say that phrase (the title of this post) before.  Sometimes you have to let an attack evolve before you begin your counter.  Move too soon and you telegraph, allowing the enemy to adjust his attack.  Move too late, you get hit.  Wait for the right moment, then move, and you can execute your technique.

The same is true of this Counter-Revolution in which we are engaged right now with the Communists of the world - those Communists who are within a breath of conquering America.  I use the word Communists as a label, it covers all of the Evil we face.  If we move too soon and begin our attack, we make our road harder to travel as a percentage of the public will see Patriots as the morally wrong force.  If we move too late, we'll be at such a deficit that even with public support, we will lose.  At some point there will be a catalyst that acts as a trigger, such as an economic implosion, or some individual from one side or the other is going to attack in such a manner that it escalates to critical mass.  Then it is on, and whoever has the support of the public has what they have.  If we lose that fight, or begin at a deficit, we can always win a plurality back, if we fight smart.  I'm simply not too worried about Hearts & Minds.  I care about killing Evil - once we do that, everything else will work itself out.

Our modern Boston Tea Party happened February 19, 2009 when Rick Santelli unloaded from the floor of the Chicago Mercantile Exchange.  What I found interesting is that I never watch CNBC, but I happened to be tuned in and I heard his rant live.  I was shocked.  I knew something big had just happened.  I had no idea how big.  Since then the Establishment Republicans have marginalized, but not killed, the Tea Party that sprang to life in the aftermath of Santelli's rant.

Many Patriots are eager for shooting to begin - too eager.  They are discouraged because it has now been just over four years since Santelli unleashed and began a paradigm shift.  In that time, the nation has been hijacked even harder to the Left, and the political clout of the Tea Party has waned.

But remember, it was 16 December 1773 when our first Tea Party took place.  18 months passed before Captain John Parker went to the Green at Lexington and the shot was fired.  Another year would pass before Mister Jefferson sat down to write our Declaration of Independence.  It had to evolve.

As it is evolving right now.  The Enemies of Liberty have no intention of suddenly ceasing their march for worldwide domination.  They are not suddenly going to quit or abandon their plans.  At the moment they are at least as over-confident as was King George.  And to be honest, both the King and the heads of our current Hydra have good cause to be confident.  But like the King, those who mean to be Masters today will lose.  They will lose on a scale that even the word "epic" can't begin to convey the true scope of what they will suffer.

I do not have one single shred of evidence to back up my mouth.

But I have faith that Mankind is currently taking an evolutionary leap forward - we are in the process of surpassing ourselves.

Life on this planet that is circling an insignificant star is about to be as ugly as it has ever been, on a global scale.  There will not be one single person who escapes even tangential suffering as a result of the killing of the Evil I am calling Communism.

That is what is coming, Patriots.

Communism, the greatest Evil this planet has ever known, at least in our known history, is about to reach to consolidate its grip on the entire planet.  In that flawed move, we will kill not only Communists, but every Communist, and even the idea of Communism.

Yes, you can kill an idea.  For whatever reason you and I have been chosen to be here for this fight, by God, or by mere chance, or by some force we can't comprehend.  But you and I are the one's who have been chosen to wipe the notion of Communism from the mind of Man, and in so doing, improve our species on this planet.  We are evolving as an animal.  We will be forced to embrace every molecule of our barbarism, our savagery, our bloodlust in this fight to kill Communism.  In so doing we will unlock secrets about ourselves.  And we will be better for it.

Our Posterity will clean up the aftermath, and they will move forward in a paradigm that only you and I can bring to life.

That is our purpose here.  Now.

III Percent of the Colonials on the continent gave the Americans who were yet to be born the ability to come to this point in time and space.

III Percent of us will do the same, and we will change Mankind.

Our advancement as a species will not be free.  It will cost you and me our Souls.  We will be forced to go inside ourselves to that place where our most ferocious inner demons are born.  You and I will, mercifully, not survive very long once our task is completed.

To kill an Evil beast places no moral burden on our Soul.  But what we will do, what we will be forced to unleash, the ugliness inside ourselves that we must release to win, will be enough that we will welcome death once our task is finished.

There is going to be a fight.

This fight is for everything.