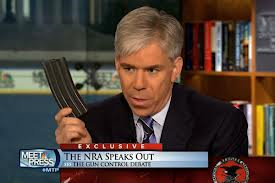 "Rule of Law is dead" you've heard me declare.

Most of you are probably aware that David Gregory used an "illegal" 30-rd mag to make a point on his tv show.  When it was pointed out this was criminal, the Prosecutor let him walk - not even a day in court.

Mark Witaschek lives in DC.  He had a spent brass shotgun cartridge in his DC Home, and the same Prosecutor who let David Gregory walk wants to, is trying to, is spending serious public money, to ensure Mark Witaschek goes to prison.  Mr. Witaschek is apparently a successful financial guy (you have to be to live in the part of DC where he lives) and to be extra-careful not to run afoul of DC firearms laws, he keeps his gun collection at his sisters house, across a river that separates Washington DC from the Commonwealth of Virginia.  You read that properly - he keeps his guns and ammo in Virginia.  He had 1 overlooked spend shotgun brass in his DC home.

READ THIS SENTENCE TWICE:  And we are not done - after the arrest, DC LEO, WITHOUT contacting Virginia officials, went to the sister's house IN VIRGINIA and demanded that she surrender her brothers collection to them.

But I'm not going to write about the insanity of the case, because you and I already know the real story - you are either in the "in-crowd" or you are not.  You are one of "Us" or one of "Them".

I have written probably hundreds of times over the last few years that every problem we face today was addressed by our Founders and Framers.  They warned us what would happen and how it would happen, if we did not pay eternal vigilance to Liberty.  We are reaping what has been sown since the parchment was still wet by Men who mean to be Masters.

The premise of this republic is supposed to be that we are all equal under the law, and that protecting individual Liberty is the highest task of any law.  I often quote Mister Jefferson's Rightful Liberty definition as the most articulate and concise definition of individual Liberty, Natural Law, ever uttered.

We have the "Rule of Law" so that the minority may not be injured by the majority.

A Patriot wrote me a few weeks ago and essentially "Rule of Law" is a misnomer and should be scrapped.  I both agree and disagree - I agree with Jefferson's premise of "Rule of Law", Rightful liberty is unobstructed action according to our will within limits drawn around us by the equal rights of others, but as my reader pointed out, and so did Jefferson in the sentence immediately following his definition of Rightful Liberty, when he wrote: I do not add 'within the limits of the law' because law is often but the tyrant's will, and always so when it violates the rights of the individual.

I say again: Our Founders and Framers warned us in excruciating detail how we would all end if we did not do the Hard Things required to protect and preserve Liberty - that tyrants would begin to use "the Rule of Law" to impose his Will, thus violating the Rightful Liberty of the Citizen.

For the "Not one more inch crowd" Fuck you, what have you done to back up your mouth in this case?  To the "No more economic Wacos crowd" - Fuck you, this is an economic Waco, at best!  Hey, I know - Let's send Cathy Lanier a 30-round magazine!!!  That'll really show 'em we are bad-ass!  For the "No Fort Sumter crowd" - Fuck you, "Fort Sumter" happens hundreds of times every single day in America.  I don't care that you are cowards, hiding behind empty threats, but at least have the balls to admit you are hiding behind empty threats.  Stop fucking bleating your outrage at "the tyrants" and telling us all how you intend to do something about it once "They" go "too far..."

How about picking up a Barrycade and returning it to sender?

Empty fucking threats tell a bully that you are a pussy.

I hate a fucking coward much more than I hate even the Communist garbage.

At least the Commies have the sack to act.

To my reader who advised I should qualify "Rule of Law" - you are correct.  Mister Jefferson's definition, and the commonly accepted definition held by people who truly seek Liberty, that Rule of Law is quite dead.

We live today Without Rule of Law - WRoL.  When I write that phrase in the future, my readers will know that I mean the Rule of Law embodied in the DoI and BoR, because it is quite the fact that Mister Jefferson's second sentence is in full effect and that the Tyrant's Rule of Law is working at full throttle.

Here's the piece if you care to read the specifics.