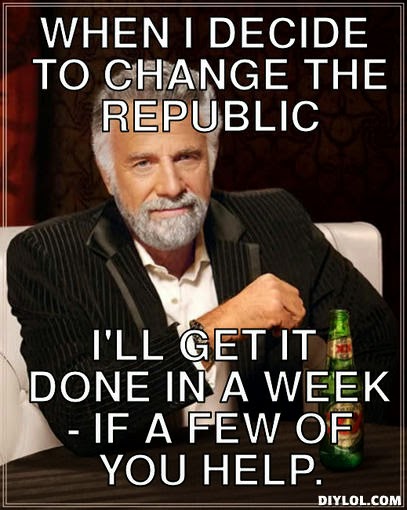 I will continue my One Week series.  In some places you may have to read between the lines.  You may have to use your brains.  If you decide the strategy is something for you, mettle and grit are requisites and you will have to define Victory as did Leonidas and his allies.  Don't jump to conclusions.

Please do not read a few hints and commentaries and think you have it all figured out.  Let it evolve.

Victory is NOT going to be found by meeting in Washington DC with a few thousand people who demand the resignations of our current leaders.  Indeed, I would take the position that such is un-American - Third World, unfitting of Americans.

Americans are to be honest in their actions.  Americans do not resort to the power of the Mob, for the precedent is unacceptable.  Americans are not clever or tricksters - ours is to be found in boldness and rectitude and ultimatum that include the ballot box or outright honest hostility.  When Americans change their Government, we vote them out, we impeach them, or we go to war.  Assassination is not American redress (except as part of legitimate war).  It is not worthy of the Patriot.

﻿﻿﻿﻿In one of my very first columns written online (it was at Kerodin.com) I suggested that Patriots band together, sling rifles and Go Bags, muster and then march on local LEO shops across the country, as one, all at the same time.  This was one of the first time Vanderboegh decided to try and eviscerate me personally and my concept, accusing me of trying to send Patriots to their deaths and to start a bloody civil war ala Fort Sumter.  I won't comment on that, I will simply offer this:

You and I know that the only power truly at the disposal of .gov, at any level, is the men of LEO and the men in .mil who will accept the orders to go forth and project their force on behalf of bureaucratic and elected Masters.  If the ether were to suddenly vanish those in LEO and .mil who would go forth at the orders of their Masters, there would be no force projection upon Patriots and other Citizens.  There would be no LEO shutting down lemonade stands.  There would be no LEO arresting anyone for smoking a joint on the corner, no dead Citizens when the wrong (or right) house is invaded in a no-knock, no chains put on a merchants shop by IRS slugs.

The key to every edict, law, demand of .Gov is their ability to send men with guns out into the populace who will do violence on their behalf.

So how simple is this concept: No LEO, no abuse of Liberty.

I invite anyone and everyone who thinks my assessment is wrong in physical terms to post and articulate why I am wrong.

LEO need not be killed.  As I said earlier, what if the ether simply swallowed them up?  What if they were simply convinced not to follow orders?

The problem of tyranny in America would end - right now.

**WARNING**  If you post a stupid comment, I will go all Kerodin on you. If you make a good faith effort, I 'll do my best to control my asshole gene.