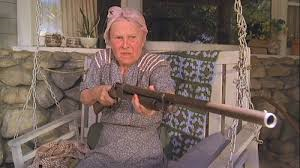 I've read several people, women included, who consider themselves out of the fight for Liberty, aside from taking care of specific chores, many of the in the home.  In particular I watched Angel from a post the other day, as she limited her capabilities.  Make no mistake - Angel is that Warrior Angel.

This is where common sense defeats all the sooper-secret-squirrel cloak and dagger silliness.

4 generations of women in my family, from by great-grandmother to my aunts, would do their chores inside and around the house, which often including kicking me and my cousins, and these houses ranged from deep, deep southern homes in the mountains of Virginia to this very house I call home now in the prime & proper historical district of DC Suburb known as Gaithersburg.

To a woman the end of the day would include a rocker, a corncob pipe, and very, very loaded and ready long gun either across their lap or leaning within range.  There was little mischief in the neighborhood, because my maternal role models were not the only ladies on the street with the same upbringing.

And yes, when a particularly fat squirrel was stupid, he'd fall from a tree and if not dead, soon was from one of the grandkids, gutted, skinned, and ready for the pot.

Rape?  Assault?  Teenagers with their shorts at their ankles?  Only if they were catching a switch the size of a 2x4.

So all you men and woman who think you have little to contribute when it comes to cocky-Rocky the Badge driving or walking up the street when the time comes...

Get it?  Add it to the One Week series of lessons.

Quantity has a quality all it's own.  Can you say Dog Pile!