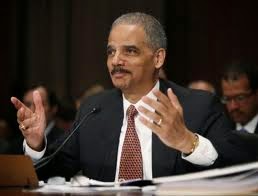 What do you call it when the Department of Justice undertakes efforts to force Banksters to deny service to lawful business owners based on political differences?  I know if the roles were revered the Lefties would call it Economic Terrorism.

I have said the Leftists in America mean to see you bend knee, imprisoned or dead.  They mean to force you to their will.  If you refuse, they will seek to interdict your ability to feed your family.  If you persist, you get the Lois Lerner treatment and DoJ considers sending armed men to put you in prison.  If you resist a DoJ dispatched Team, you will die.

The Enemies of Liberty have entered their EndGame.  They are ramping up on all fronts, as predicted here more than a year ago.  The pressure and challenges will continue to ramp up through the November elections.  Then, whether they win or lose in the House & Senate, they will begin to go hard.  Not necessarily on November 5 - but between November 5, 2014 and November 8, 2016 you'd better believe you, personally, will face the King's Men for your resistance to their will.

America must be fundamentally transformed.  You are an obstacle to that goal.  The Left knows they will never have a better point man for that goal and never again have the momentum and key players in place.  They mean to meet you head-on prior to the next Presidential election.

You have been warned - repeatedly.