Now Codified by all three Branches: Detention of You, for whatever they choose... 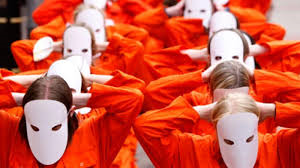 America has a history of passing bad laws - tyrannical laws - that only get turned over long after the fact.  Alien & Sedition, WWII Internment, now NDAA.  Before anyone in .Gov even begins to cry publicly about NDAA, there will have been many, many people swept away under the law.  Most will never be heard from again.

You and I knew the moment NDAA popped up in legislation that it targeted you and me.  Now that SCOTUS has signed off on it, you'd better believe FedGov will use it.  They may have already used it in America, against someone who doesn't have the ability to be noticed when they are gone.  But soon they'll take someone we will notice as being missing.  Those who notice and dare speak open the door to their own detention - but many will merely meet Mr. Fed who slaps them with a Patriot Act STFU order.

If you do not realize, even now, that there is open warfare between Enemies of Liberty and Patriots, you are surely and truly F'd.  Like Germany, every bit of tyranny that is about to be unleashed on Patriots now has the cover of law - it is "legal".  And we know what happens to people in America who "break the law" and we know how the average citizen looks at anyone accused of "breaking the law."

Those who would be Masters are in their Endgame.  I hope you realize it before they take you.