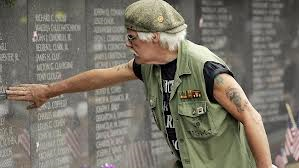 As you know, I sometimes look at things with a political eye.  Is it wrong then for me to suggest this theory?

Vietnam Veterans were treated like shit when they returned to the United States because, unlike the recent wars in the Middle East, the Vietnam Vets kicked the living shit out of Communists.

Just a theory, but one worthy of this advice until proven untrue:  Don't kill communists by the hundreds, win every battle, and set their expansionist plans back, and then expect a warm welcome home from their fellow Marxists here in the states.

This is from Karl at Ushanka, here.

It's awfully hard to find fault with the logic - in fact, I can't find one.  Beuller?

For you Leftist 'tards & trolls who surf here - Fuck you.  Sideways.  In the neck.