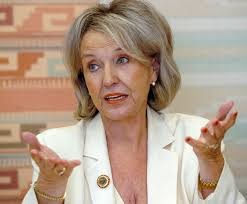 We all know our President doesn't just dislike Jan Brewer, Governor of Arizona - I will dare say he has a pathological hatred of the woman.  They have banged heads since 2008, and the President has never been shy about using the might of the Federal Government to force his will up[on her and Arizona.

CavMedic noted the story first that illegals were being bussed from South Texas and released in Arizona.  There weren't many details at that point.  Was it Texas behind the move?  CavMedic has stayed with the story as more has become known.  Now we know it is FedGov behind the massive deployment.

Yes, I just called it a deployment.

Brewer was informed this weekend by some source in FedGov the practice would continue "...for the foreseeable future..." and she could expect more than 1,000 unattended illegal children this weekend alone, with many more in coming weeks, to include families and partial families.

Now we III must ask the hard question: Why?

Is it merely one more FU to Jan Brewer from a White House that we KNOW is personally vindictive?  Is it personal?  Is it a political move to crush Arizona's economic infrastructure by overwhelming the state with mouths it can't feed, clothe or shelter?  Is it as simple as flooding the state with illegal voters before the November polls in an effort to help a few shaky Dems in the mid-terms?  Is it a voting ploy for longer-term vision of trying to turn Arizona Blue by 2016?  (Arizona voted 11 points for Romney.)

Now let's look at a few strategic and tactical dots we may or may not wish to connect through the lens of the III.

La Raza is strong in Phoenix.

We all know La Raza's ultimate goal is to recover "Mexico" that was "stolen" by our cowboys.  We know at La Raza events they fly the flag of Mexico, not Old Glory.  La Raza is only part of a trio of organizations seeking reclamation of "historical homelands".  There is also MEChA and Aztlan.

In 2012 the President plucked former Senior Vice President of La Raza Cecelia Munoz and made her the head of the Domestic Policy Council.

The following companies have high-level executive liaison and support for La Raza:

We know the implosion of the economy is imminent.  We know the Enemies of Liberty are counting on their ideological allies to fight when the time comes.

I called this a "deployment".  Could it be pre-staging for what we all expect will come soon - chaos, economic failure, regional, racial, ethnic and religious factional fighting across America?

Maybe a deployment.  Maybe nothing more than an FU.

Good on CavMedic who started connecting the dots, then followed through.

This one is not over.

Remember to follow reader-provided news flashes at the tab on the top of the page titled "News Alerts".