Can you put a Fire Team in the field? 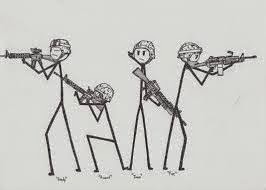 The two polls at right reveal some interesting insights.

If you haven't answered the polls yet, please take a second and weigh-in.

Though the sample is small, and the audience is all III Patriots, look at the percentage of you who claim you can put a 4-Man Fire Team on the X.  47% is an outstanding percentage.  I doubt very seriously if the percentage was that high just 3 years ago.

If that percentage holds across all of the III Community, and if distribution is sufficient, consider what one active Fire Team in each state would do to the system, when considering Frein or Dorner.  Consider a Fire Team in each significant Metro Area across the country.

As you know, I only advocate violence in the case of self defense.

Two relevant pieces of Intel, from sources I trust:

1) Ferguson is likely to get very, very ugly (We have boots within the AO)

2) At least one company that makes TOCs and related vehicles has been slammed with nationwide orders, to the point they are considering a third shift

None of us like to consider an America where good people need a Fire Team.

But there are Bad People in America.  Some of them want a fight.

They should be very careful for what they wish...

A final thought: If you can put a Fire Team together and in the field, they will need a Leader.  Some people will claim everyone is equal, but reality says that in such a Team there will be a natural Leader, one who the others choose to follow.  Not a dictator - just one of the Team who they trust more than others.  If you can put a Team in the field, odds are that YOU are that Leader.  Do not deflect or try to escape your natural role.  Lead those who seek a Leader.  As I have said - You are the Officer Corps of the III.