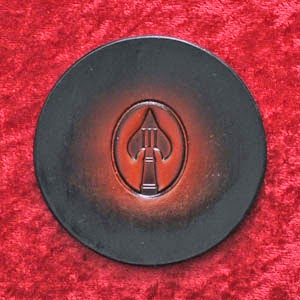 Craftsmen take pride in their work, and America was once filled with such people.

The III Society is proud to announce that Dragon Leatherworks is the 'Official Holster & Sheath Craftsman" for the III Percent Society for America.  Dragon Leatherworks is owned by a serious III Patriot and a serious Craftsman.  He has graciously offered a 5% discount on his custom leather products for III Society members.  Look at the holster below he made for Wirecutter: 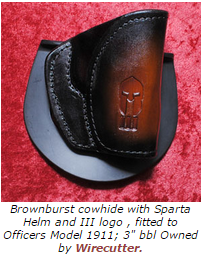 Read Wirecutter's review of the holster, here.  Kenny is one of those Patriots I would trust at my back, one of those guys I'd leave my home to go help in a crisis, and one of those guys who has proved to us all time and again, he doesn't suffer fools or lie.  You can trust his assessment, as do I.

The Samurai believed in 'practical elegance'.  Not elegance for the sake of elegance - everything they owned had to serve a purpose and serve it well - such as their swords.  But they also insisted that their possessions be aesthetically pleasing while remaining absolutely practical.  It looks to me like Dragon has found that spirit.

Consider the impact of attending an open carry event (or your local Green when the time comes) with your sidearm of choice nestled in a work of art that is beautiful, functional, and carries the logo that tells the man next to you who you are deep in your Soul - a III Patriot.

Our thanks to Dragon Leatherworks, and to Wirecutter for his review.

I ask you all to support Patriot businesses whenever possible.  Dragon Leatherworks deserves your patronage.  You know you need another holster...