Wow. Just look at how many people are marching in an #antitrump protest in LA.#california #calexit pic.twitter.com/UC7wBSCBip
— James Melville (@JamesMelville) November 13, 2016

**Interesting**  Fascinating, is it not, that most of the 'celebreties' in America who promised to leave CONUS if Trump won - they look to Canada versus Mexico.  I guess those folks don't want to go live in a Brown country... 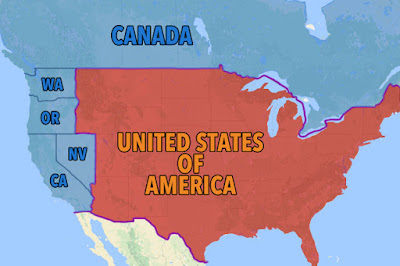 CalExit (now with Oregon, Washington and Nevada voices joining the song of stupidity) is the sort of phenomenon that is born from emotion by people with a higher than average dose of The Stupid coursing through their veins.

First: This is never going to happen, so the discussion is for amusement purposes only.

Second: There are a LOT of Americans, particularly in the area trying to break-off into the State of Jefferson, who would violently resist even the notion of Canadian rule.

Third: There are a LOT of people across America who would never trust the Marxists who want to CalExit with our entire Pacific coast, harbors and resources.  We know it would take about 10 minutes before those idiots started selling Long Beach to the PRC, et cetera.

Fourth: Anyone who wants to demonstrate their sincerity, here's how you do it.

A) Sell your assets and get your curtain crawlers out of American schools.
B) Renounce your US Citizenship.  It's nothing but a bureaucratic form that you sign at a US Diplomatic Station in a foreign country.  Then, while you are in Canada (or where-the-hell-ever) apply for Citizenship.  (Clue - it may not be as easy as you think.  Most countries actually have standards regarding who they let become Citizens.)
C) Stay the Fcuk out of America - which is now and shall remain California, Oregon, Washington and Nevada. Don't ever come back here without a proper travel visa.
D) Just sayin'...